Day 7. Miracles have taken place here in modern times in the Milk Grotto. Latter is so named as Mother Mary nursed baby Jesus in the grotto. Some milk fell on the ground and turned the grotto walls white. Powder is extracted and it’s that powder when taken, say with prepared foods, that provide the healing associated with this site. People with fertility issues have been able to bear children, including our tour guide’s wife who had two miscarriages. Testimonials of other healing are mounted on the wall in the shop in this complex.

Sculpture over the exit doorway 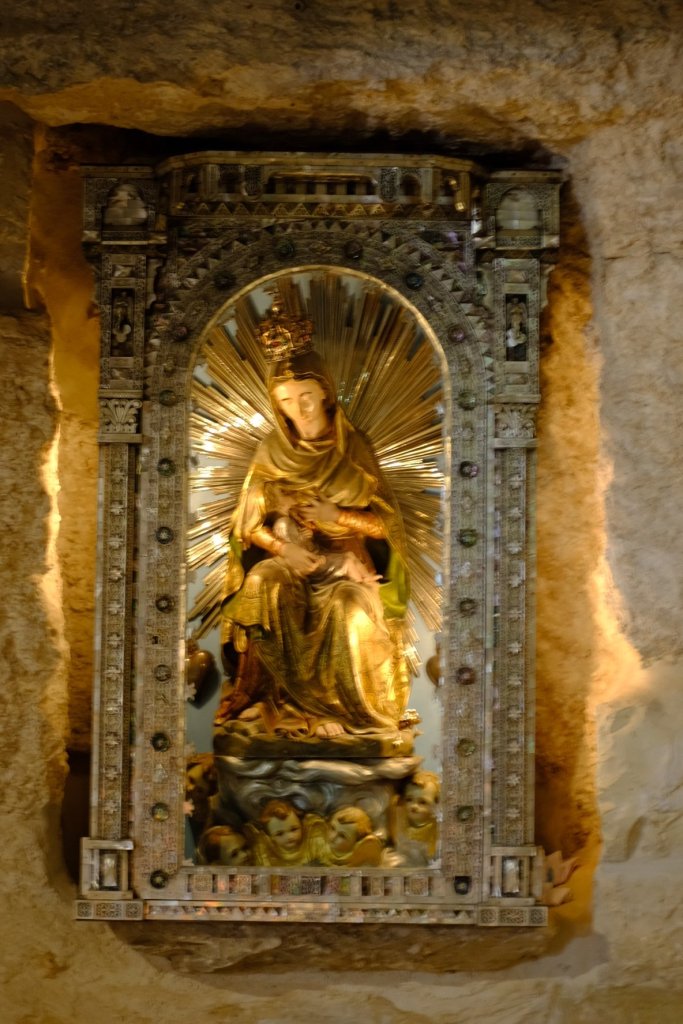 Altar in the grotto 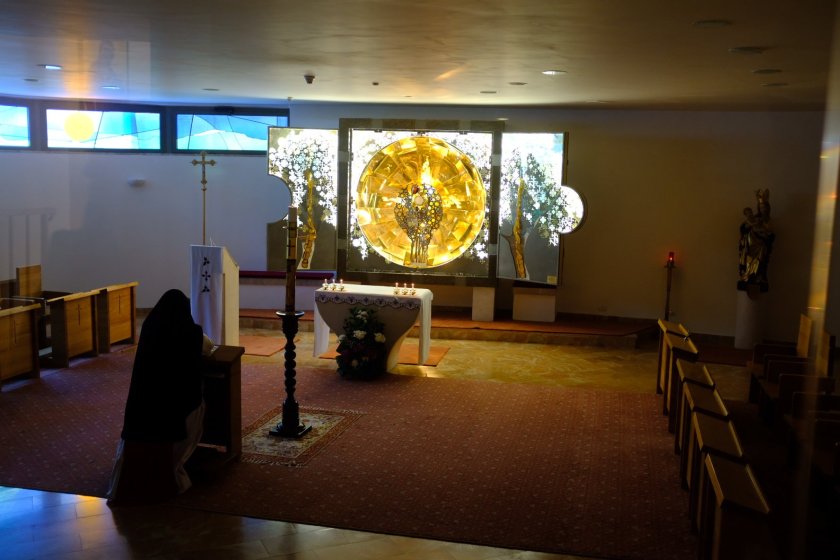 One of the most beautiful chapels. A Sister Nun is always present, praying. 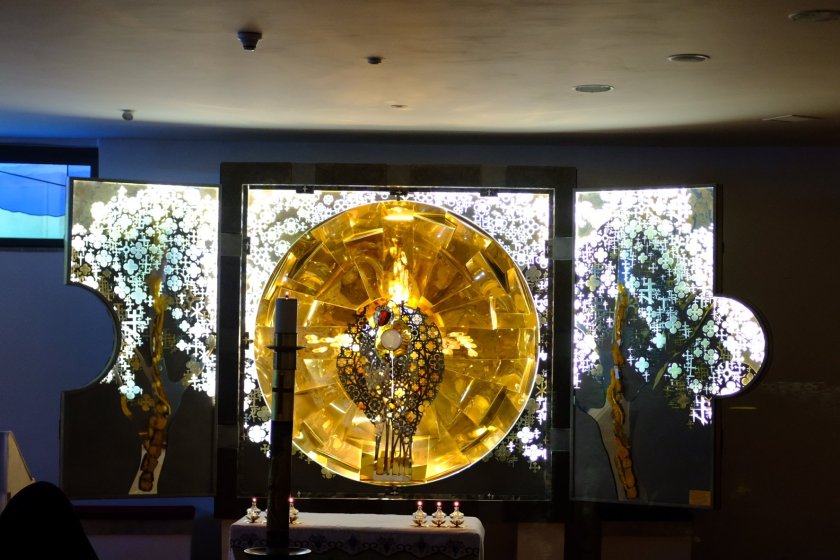 Close up of the Blessed Sacrament on display.

We celebrated Mass at this Church of the Mother of God.

This amazing day, like the others was just getting started. Due to some concerns, the afternoon itinerary was adjusted and we made a trip to Masada. This is a must see as this was King Herod’s winter palace.

We passed the Dead Sea and Wadi Qumran (where the scrolls were found) on the way to Masada. Former continues to drop 1 foot each year.

Masada is a fortress palace. It’s also known as the place where the second Jewish uprising ended with the suicide of all the Jews inside, except for 5 children and 2 women who hid themselves. The alternative facing these freedom fighters was slavery. The Romans were known for their cruelty as they imposed order across their empire (crucified rebels took days to die an excrutiating death).

The King’s bedroom, bathroom, living quarters are located for stupendous views across the valley (from 500 feet above).

Oh, the King lived like a king. They found wine bottles and mosaic tiles from Italy.

We saw many (young ones) who decided to walk up to the complex via the ‘snake path’ rather than take the cable car!

There’s much architectural thought that went into the design of the complex that one can spend hours here. How they captured rain from the surrounding hills and mountains via ducts that drain into water cisterns, and subsequently, use donkeys to ferry up and store in the complex itself. There’s a cast model to show this water collection!

Cast model of the fortress palace

View across the valley

The squarish demarcation of one of the Roman camps during the siege. This was the largest camp which the Roman general was based in.

Ruins in the complex 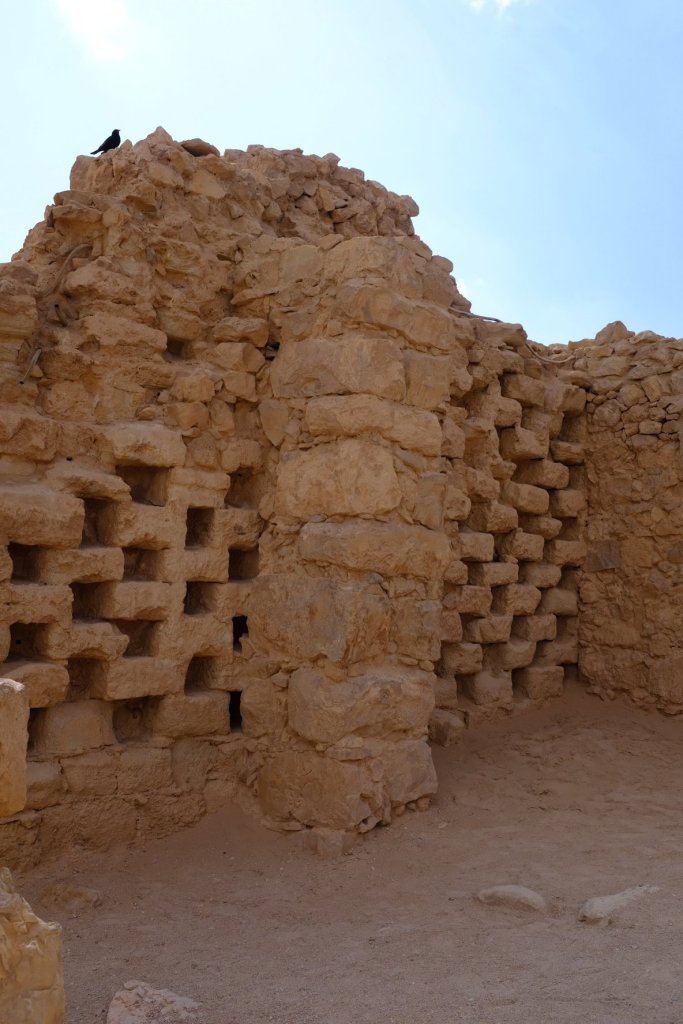 Our day was completed by having dinner with local Christian families who are to host us. This is a real treat eating home cooked meals and hearing their stories.

At dinner, something occurred that deepened my self awareness post event. I was missing a glass for the beverage. Mid dinner, as I topped up a companion’s glass, another companion took an empty glass from an unoccupied seating. I interpreted that she was passing the glass to me for my own use. So, I filled it up and set it next to my plate. I don’t recall what the trigger was, but I suddenly realized that she herself was missing a glass and had wanted it filled for herself. Of course, I immediately passed to her and our host got up to get one more glass. The insight occurred to me the next morning.

When we have a need, and the ‘solution’ appears, we quickly reach for it. Perhaps we should slow down and see if someone else is in similar or greater need.

Kudos to our tour company, the Holy Land Tours, for rapidly responding to on the ground circumstances, offering an alternative that was much better and creating that local connection with families.