Day 9. Bethesda Pools was one of three locations in Jerusalem where Jesus performed miracles (a lame person sitting by the polls was healed). The Jews believed the first person in the pools for the day was definitely healed, so, there was typically a rush when it opens (according to our guide, some even climb over the gates before opening hours you beat the rush). Is there a non-religious or non-spiritual equivalent in this modern times? Yes, as we have psychiatrists, counsellors, doctors, etc. Can we in our own ways be channels of healing for those around us, in our work and occupations, during our rest and play, during our social interactions, during our parenting, etc?

Remnants of the Bethesda Pools, with a few remaining columns of the 5

Next to the Pools is a church built by the Crusaders, one of two still standing in Jerusalem. This is the Church of St Anne.

St Anne was the mother of the Virgin Mary. There is minimal decorations in this church. However, the acoustics is amazing. Singing in the middle of the Church nave amplifies the sounds throughout the Church. Our group and others same various Christian hymns. 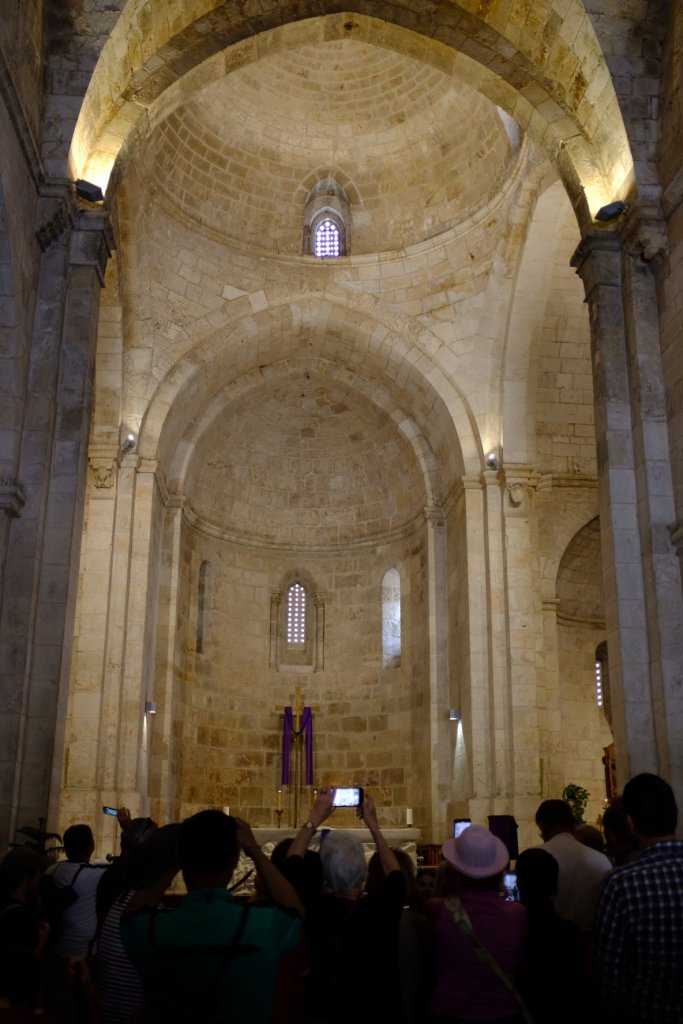 Sculpture of St Anne and Mary as a child.

We then proceeded along the Via Dolorosa, following the Stations of the Cross, which traces Jesus torture, sentencing, carrying of the Cross, crucifixion, death and burial. The later stations are in the Church of Sepulcher.

The ceiling’s mural is a crown of thorns.

The Via Dorosa is chock full of shops on both sides, catering mainly to tourists. There was the scattering shops that obviously cater to the locals. It can be quite over-whelming.

Each of the various quarters, Muslim, Jewish and Christian, have its own character and ambience.

Our last visit for the day was St Peter Church in Gallucantu (in Latin, it means cock-crow). This church was built over the house/palace of Caiaphas, the High Priest who presided over the Sanhedrin.

This was also where Jesus was imprisoned before being handed over to the Romans. We had a moving prayer and singing session at the dungeon level.

Atypical mural above an altar – Jesus with hands tied.

Above is a 180 degrees panaromic picture of the main chapel

The actual road that Jesus took to walk into Jerusalem

Peter’s denial of Jesus three times shows how fallible human nature is. Yet, that mis-step did not deter Peter from fulfilling his mission, to build the Church body that Jesus assigned to him. Perhaps that’s the most important message from today.