First time we used the alarm clock on this Camino. Reason is we wanted an early start. Our Airbnb host, Miguel kindly agreed to have breakfast ready for us at 7am. We had initially requested for 8am until we met a group of 8 (East) Malaysian women at dinner, who said they will start walking at 6am. We brought forward our planned breakfast by an hour, which turned out to be so beneficial to our walk.

A delicious and ample breakfast spread prepared by Miguel, our Airbnb host in Porrino.

We started our walk at 7.31am, Joon put on her jacket while I walked with just the dry wicking polo shirt. It was a bit chilly but I figured the walk will generate some body heat.

We had only walked this early on our first day out of Porto, which was at 6.30am, and it was an overcast day with some light drizzle. Compared to Days 2 – 6, today’s walk was so much easier with the cooler temperatures. It took us 5 days of slogging in the afternoon sun to figure this out. Due to the distance to Redondela of 16km/9.7miles, we reached latter at 12.15pm. What a delight today’s walk was.

We love dogs, and both Joon and myself had dogs during our childhood days. Malaysian dogs are the barking type, while American dogs are non-barking. By the way, if a dog barks and his tail is wagging, he’s being friendly. Anyway, we realized that we can’t classify Spanish or Portuguese dogs in either category. Rather, the barking or non-barking character seems to be a localized and not, national trait. I am not sure if it’s the water or the micro-climates within the provinces/towns.

Some readers may think that I am buttering Joon up by calling her Eagle Eye Joon. That’s so not the case, as illustrated by below:

Well, I learned something. I am definitely not doing anything naughty within sight of Eagle Eye Joon! 🙂

A couple of nice monuments before the trails today.

Here are the pictures of the lovely valley. 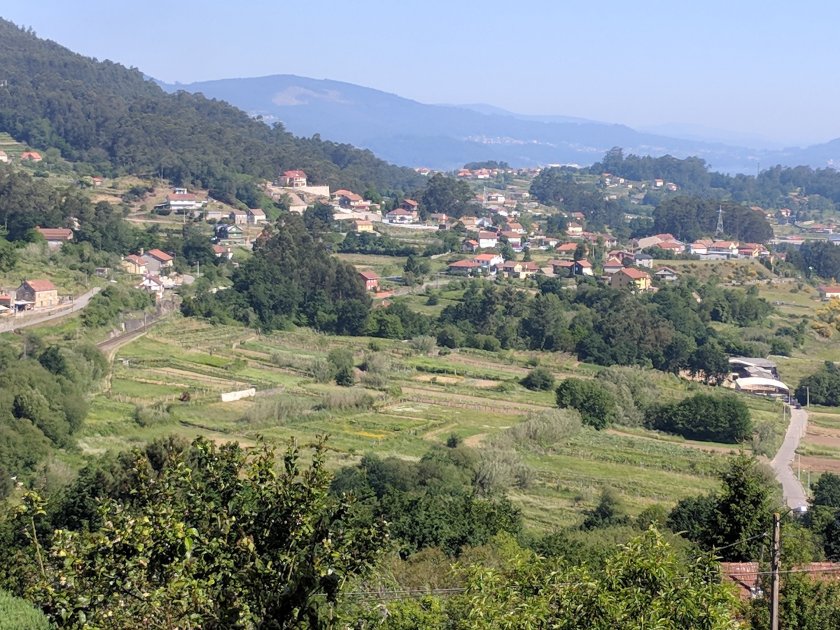 The guidebook had highlighted that today’s walk to Redondela, while shorter compared to other sectors, is actually harder due to the uphill climbs. We found the early morning fresh air really helps with this.

An observation about approaches in using walking sticks. I tend to alternate the sticks and place them a bit beyond my feet. I came across two other styles. The first was by a lady (who was probably German due to the efficiency of the style), who placed the sticks alternately forward as far as the mid-point of her forward feet. It was a very brisk style and one can hear the click clacks in synch with her foot steps. The second style was by an Austrian couple, especially the man. He place both sticks forward at the same time ahead of his feet, and seemed to pull forward and push himself off. I tried both of these two styles, and they both work. Due to my left hip, I found the Austrian style more effective in going uphill, or when I need to catch up with Joon (after lagging behind for some picture taking).

I observed too that some house owners along the Camino route, had decorated certain aspects for us Camino walkers. I appreciate their gesture, and thus, highlight a couple of these.

Notice the figurines placed on the exterior window sill facing the Camino walkers!

I wonder whether this pair of boots belonged to the house owner, or was found discarded. It now has a new purpose in life for the Camino. Some of us may experience that in the future!

I love playing detective, especially when I travel. It’s discovering the cultural, societal and national peculiarities. Here’s a selection of sights that’s a bit unusual.

A clothesline covered under a shed. Perhaps it’s not sun power but wind power here that dries clothes?

The size of this ash tray was the standard for all the outdoor tables in this Cafe.

Football mascot as the Guardian of the gate. 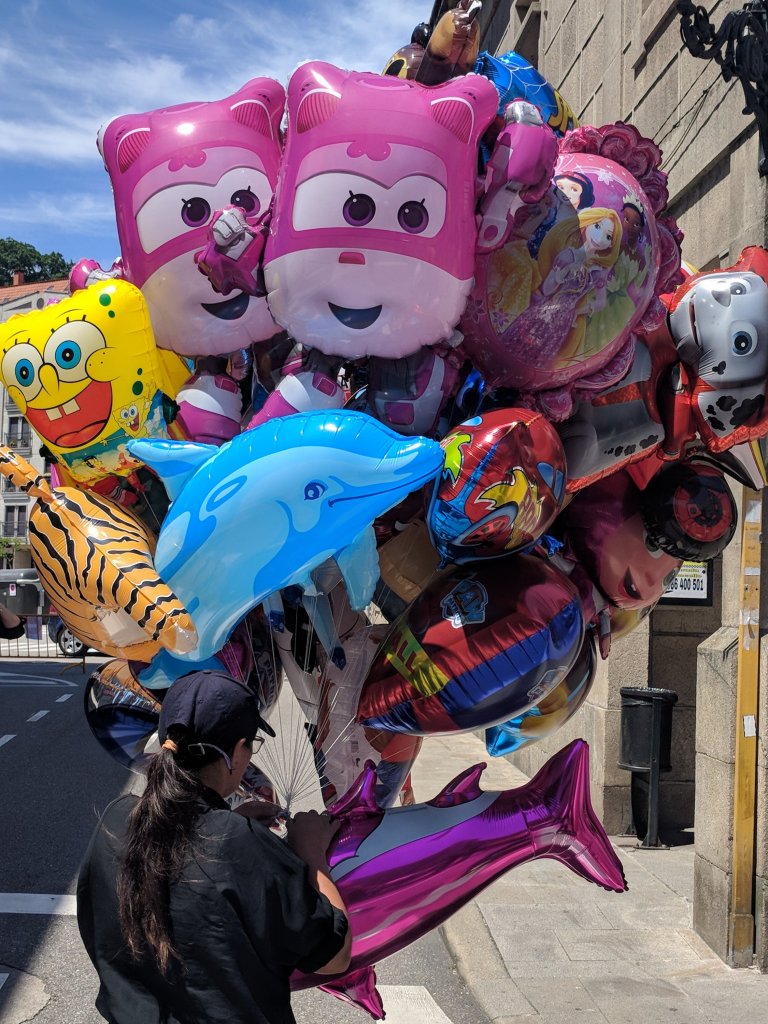 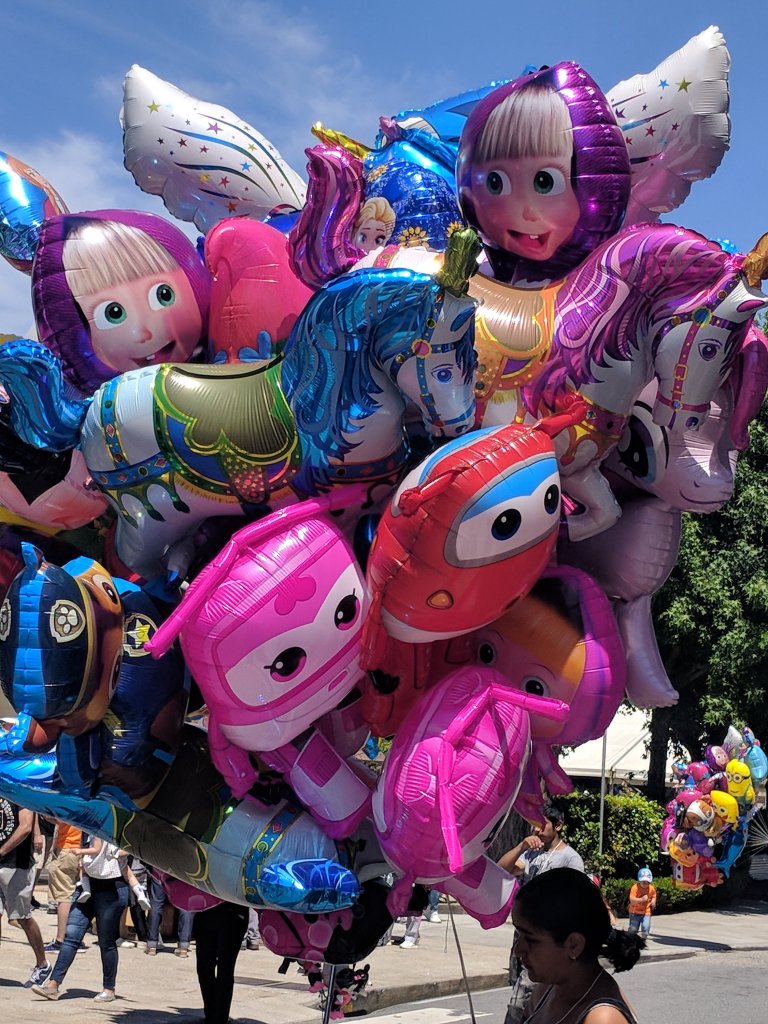 Balloons for children reveals a lot about the type of programs they watch and identify with.

These images are so animated unlike those in USA. Running to, having fun in school. 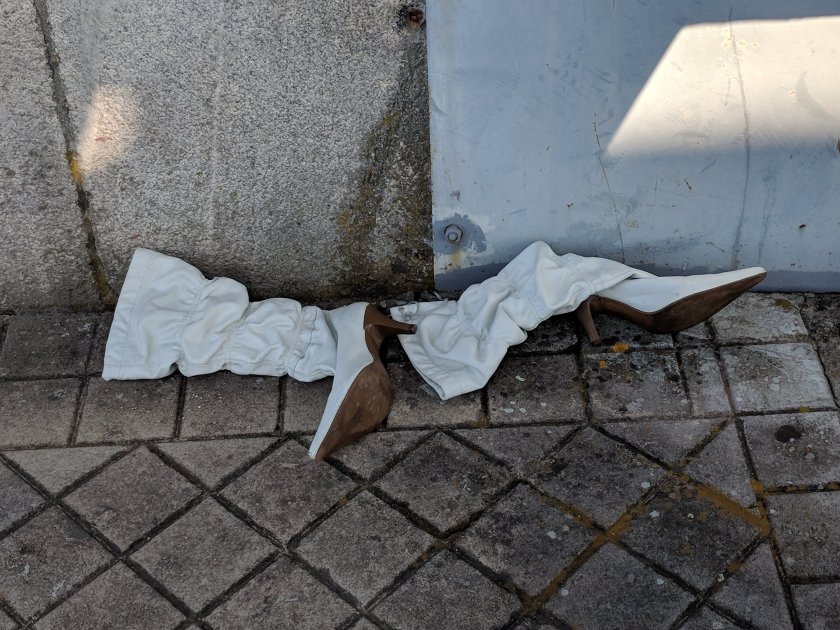 We spotted this pair of leather boots on the bridge. Hmm.

Despite the fact that we have passed many churches during our walk, we ended disappointed that we could not find a service on Pentecost Sunday, when the Holy Spirit was breathed onto the Apostles. In speaking with some nuns, the services were only at 10am and 12pm. 😦

So, we end this day with quite a bit of time. At an albergue, with a total of 16 beds. We were the third and fourth check in, and we selected these bunk beds in the corner. Much later, we realized we were next to the single bathroom serving all these beds, and we could hear the tap pipes as they ran. Joon had her ear plugs and I can sleep through almost any noise.

p/s. As we walked back after dinner, we came across this street scene. Mad Max had made a guest appearance here in Redondela.