We flew into MAD(rid) via Gatwick, London. Latter was our hub for our Holy Land pilgrimage and Camino Frances.

LGW – MAD is a 2 hours flight. When we touch down in MAD at 1335 hours, we have 1.5 hours to catch the train to Pamplona. We will overnight there before catching a bus the next morning to St Jean Pied de Port (SJPP) It would have been too taxing to attempt to get to SJPP all in one day. That’s why this is Day -1.

TIP from my niece in London: Turn off the air vents above one’s airplane seats so that one doesn’t catch any virus circulating through the air ducts.

Our streak of not catching anything on air travel ended with our return from Tel Aviv 3 days ago. A passenger on the TLV-LTN flight in front of us was coughing, and we both caught it. Joon had it worse. Hopefully, we will recover fast and fortunately, the first two days walk from SJPP is half of the usual distances that we typically walk.

Our backpacks are packed to the maximum. We left several items in London as temperatures are higher than expected (e.g. gloves). We also bought several items at the Decathelon store in London (e.g. men’s rain pants for less than Pounds 9). But given it’s a longer Camino than our CP, and that we are using more albergues, we brought some new items, such as liners for sleeping bags, day packs, Kindle and iPad Mini. The liners and our backpacks were treated with Permithin. My backpack weighed 20 pounds, Joon’s 16 pounds. As mentioned previously, we will utilize the luggage transfer services to ferry our backpacks to the next town/village. The max packed bags limits what we can buy unless we wish to ship something back to London. Our Parish Priest had commented during the Holy Land pilgrimage, that he was trying to get us to transform from Consumers into Disciples! We didn’t buy much on the CP, so, this should be fairly easy for us.

The plane left 35 mins later than scheduled as we waited on the tarmac for a slot. The pilot made up time and it appears our arrival in Madrid will be about 6 mins later than scheduled. The de-plane-ing, being bused to the terminal and immigration control left us an hour to get to the train station. Taking the bus which comes every 15 mins and makes stops would be impractical. Taking a taxi was the best option. Along the way, we came across an accident that probably occurred minutes before we reach the spot. Two ambulances drew alongside our taxi as we changed lanes. Divine Providence that we were not further behind and faced getting stuck in a massive traffic jam.

One of the scourges and risks in traveling is coming across unscruplous vendors who prey on tourists. We met our first one in our taxi driver. The information desk staff had informed us the taxi ride from airport to the train station was a fixed rate of Euro 30, which was collaborated by the taxi meter reading. Our driver said the fare was Euro 42 due to supplemental charges. When I objected, he switched to Spanish and raised his voice, a tactic that most recognize as a way to intimidate one (they speak acceptable English when they first try to secure your services). Perhaps to avoid being a helpless victim and prevent such unscruplous people from preying on others with impunity, one should find out a Complaint Helpline and take a picture of the situation. Oops…. searched the Internet on the train and one needs a receipt with the relevant details. No wonder our taxi driver was in a hurry to get out bags and depart the crime scene. Whatever you decide, keep your inner calm. It’s only money and perhaps one less meal.

TIP: Ask for a receipt with details of the particular driver/vehicle. Consider pulling out your smartphone and start video taping these unscrupulous taxi drivers and their ilk. They might just back off.

Figuring out the train platforms in Madrid (upper and lower) required one to note minor details, such as the two platform names on the sign board. Not being tunnel focused on just the Platform Number. Some other passengers were traveling on the same train, and we were advised by a train staff who was traveling to follow these other passengers.

I missed taking a photograph of the central train station as I wanted to get to the platform asap (had 30 mins to spare). It had a lush green in the center, with trees, bushes, etc. A reminder from the Camino to start slowing down.

The Renfe train is smooth and relatively quiet. TIP – bring your own headphones with standard jacks to take advantage of the video (or music). You could improve your Spanish during the train ride.

Fortunately, I decided to book the train tickets while I was in London over the weekend. The good seats (facing forward) were all taken up (there was a handful of two front facing seats available when I had booked). 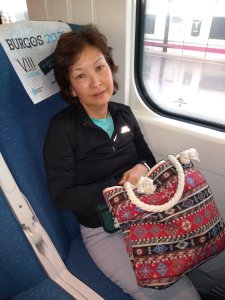 We arrived as scheduled at 6.26pm. As it was chilly and both of us were under the weather, we opted for a taxi. This driver was great, taking some inner roads and dropping us at the closest point to the hostel (latter was located in a pedestrian only area). Euro 6.50.

Restaurants in Spain only offer their dinner menu from 8pm. Given our preference to rest/sleep early after a flight and train ride, we opted for a simple meal (tortang patatas with ham) plus hot chocolate.

One thought on “Travel to Madrid and Pamplona”